About the Directors | Medicinal Chemistry Collaborative 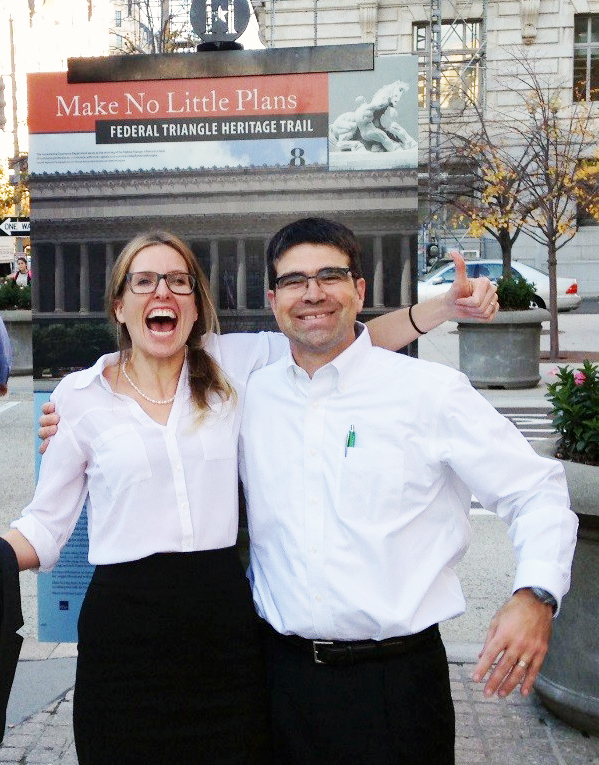 “Make no little plans.”  Nicholas Oberlies and I (Nadja Cech), Co-Directors of the Medicinal Chemistry Collaborative, spontaneously posed in front of this billboard, thinking it an appropriate motto for our decade-long collaboration.  Some of our big plans include establishing one of three NIH funded fellowship program in the nation for PhD students pursuing research in natural products , building a nationally recognized hub for natural products research at UNC Greensboro, and developing new therapeutics for drug resistant infections and cancer.  Status check on these plans? Consider them done, done and … in progress.

In 2001, I joined that faculty at UNCG with the idea to build an innovative research program in medicinal natural products, that is, the study of medicinally useful compounds from the natural world (for example, the active ingredients of penicillin, aspirin, and Neosporin).  My faculty appointment marked the opportunity to merge my lifelong loves of science and nature.  I have been fascinated by the beauty and mystery of the natural world for as long as I can remember.  As a girl growing up on a farm in rural Oregon, I had ample opportunity to engage with the natural world.  I herded goats barefoot in wild meadows, swam in remote mountain lakes, and cultivated gardens of medicinal herbs.  My family ran a small business in which we sold hundreds of varieties of seeds from medicinally useful plants. I learned the common and Latin names of each plant while painstakingly printing them on seed packets with a ballpoint pen.

My graduate training as a chemist was spent in a concrete building without windows, in what is ironically one of the sunniest places in the world, Albuquerque New Mexico.  There I programmed mass spectrometers, took them apart, and studied the physics by which ions are created in the gas phase.  I became excited by the potential to apply mass spectrometry, one of the most powerful analytical techniques for studying complex mixtures, to find medicinally useful compounds from plants.  As a new faculty member at UNCG, I set out to do just that.  The only hitch in this plan was that while I knew a great deal about how to grow plants, what they looked like, and even their traditional medicinal uses, I had no formal training in the chemistry or analysis of plants.  To establish a serious natural products research program, I was going to need help.

On my childhood farm, there grew a yew tree, recognizable by it’s rough serpentine limbs, short flat needles, and spherical red berries.  We revered this tree, knowing that its bark contained the natural compound taxol, which remains today one of the most effective treatments for breast and ovarian cancer.  Taxol was discovered in 1971 by Dr. Mansukh Wani (recent recipient of an honorary doctorate degree from UNC Greensboro) and the late Dr. Monroe Wall.  Wall and Wani did their research on taxol at the Research Triangle Institute just 60 miles east of UNC Greensboro.  I met Dr. Wani at a conference almost 40 years later, where I listened in rapt attention as he recounted the many trials he faced in his 11-year quest to isolate and identify taxol.  After Dr. Wani’s talk, I joined the rest of the scientific audience in a standing ovation, not realizing that the most important connection I would make that day was not with Dr. Wani himself, but his protégé, Dr. Nicholas (Nick) Oberlies.

My colleague Nick, a chemist who hails from the suburbs of Indianapolis, is a truly gifted natural products chemist.  You will never hear him admit this, however, because he is somewhat humble and highly superstitious (a trait he claims to have inherited from his Greek ancestors).  Nick is fond of reminding me that our first introduction was when I laughed during a presentation he was giving.  While this is technically true, I was, in my defense, laughing in amazement.  My research group was at that time trying and failing to isolate milligram quantities of pure material from plant extracts, and Nick was describing his ability to routinely produce one thousand times that quantity.  Despite our slightly inauspicious introduction, Nick and I recognized at our first meeting the potential synergies of our expertise.  I was great at analyzing complex mixtures, and he was an expert in purifying those mixtures down to their individual components.  Together, we had the potential to uncover secrets of how natural products could be used to treat disease.

It was not more than two weeks later that I found myself sitting in Nick’s office at the Research Triangle Institute.  “What I’m trying to do is simple,” he said, pointing to a portrait of Dr. Monroe Wall hanging above his chair.  “Wall and Wani discovered two cancer drugs [camptothecin and taxol]. I’d give my right arm to discover just one, and I’m right handed.”

So began a fruitful collaboration, cemented by Nick joining me as a colleague at UNC Greensboro in 2009.  That collaboration continues today, as we work together in our roles as co-directors of the Medicinal Chemistry Collaborative (MCsquared, as in “energy” in Einstein’s famous equation E = MC2; the energy in our case refers to that generated by our collaborative team).  With much support from our colleagues and the UNC Greensboro administration, we have built unique resources, including a library of multi-colored, living fungi like none other in the world, and the best mass spectrometry facility in the Southeastern U.S.  At MCsquared, we leverage these unique resources to conduct cutting edge research at UNCG and beyond, working to develop new ways to treat disease.

Humanity faces potentially catastrophic challenges as we struggle to support an increasing population on a finite planet.  Many look to science and technology for solutions.  But science does not happen in a vacuum; scientists do science, and we cannot tackle the tough problems alone.  As I consider the trajectory of my career, I am humbled by how collaborations with other scientists have been truly transformative.  MCsquared is about forging and fostering such collaborations so that together, we can accomplish what we never could alone.

Copyright © 2023. UNC Greensboro. All rights reserved. | If you have a disability and are having trouble accessing information on this website or need materials in an alternate format contact smparke3@uncg.edu for assistance.