Under the leadership of natural products chemist Dr. Nicholas Oberlies and mycologist Dr. Huzefa Raja, a major effort of the Medicinal Chemistry Collaborative (MCC) is to expand and leverage the highly unique library of 1,000 living fungi housed at the University of North Carolina Greensboro.   This library includes fungi that have been collected from unique ecological habitats in the United States.  In building it, we have identified not just new species of fungi, but entire new orders (see example manuscript Additionally, through our collaboration with Mycosynthetix CEO Dr. Cedric Pearce, we are working with a much larger library of over 55,000 fungi.  The Mycosynthetix collection is unique in that it contains slow growing and uncommon organisms, including many that have never been described in the literature.  Both the UNCG and Mycosynthetix fungal libraries are a rich source of new chemical entities that are being explored as potential treatments for disease.

Our drug discovery efforts focus on fungi for several reasons.  First, they are one of the most diverse organisms on the planet (second only to insects), and among the 1.5-5.5 million fungi estimated to exist on earth, only 125,000 have even been identified, let alone studied to see which molecules they produce. Second, the track record of fungi in drug discovery highlights their promise.  It was the fungal compound penicillin G that sparked the antibiotic revolution, and since then fungi have served as the basis for a wide array of drugs, including caspofungin acetate (for Candida infections), cyclosporin A (an immunosuppressant), and most recently Gilenya, the first orally available drug for multiple sclerosis.  The top selling drugs of all time, the blood cholesterol lowering “statins” were developed based on lead compounds from fungi.  Finally, and perhaps most importantly, fungi constitute a renewable and rapid way to produce natural products.  A promising fungus can be rapidly grown in large quantities to produce the desired molecule in larger amounts.

Scientists from MCC have identified a number of highly promising drug leads from fungi, including the compound Ω-hyrdoxyemodin, which is currently being explored as a new treatment for infections, and the verticillins, which are being explored as a way to treat certain types of cancer.  Some of the publications highlighted below expand on the details of these discoveries.

What are fungi? Fungi are opportunistic organisms that are distantly related to plants, and more closely related to animals.  Unlike plants, fungi cannot photosynthesize, thus, they are unable to make their own food. Fungi are important decomposers of organic matter; they act as symbionts of plants, and animals including insects; and cause destructive diseases of plants, humans, and animals. Fungi are economically important because they can produce both beneficial and harmful compounds. The yeast used to brew beer and make bread is a type of fungus, and edible mushrooms are the fruiting bodies (reproductive organs) of fungi.  We at the Medicinal Chemistry Collaborative are particularly interested in using the potent and diverse chemicals produced by fungi in medicinal drug discovery. 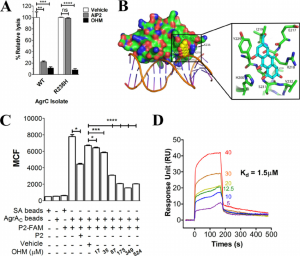 Antibiotic-resistant pathogens are a global health threat. Small molecules that inhibit bacterial virulence have been suggested as alternatives or adjuncts to conventional antibiotics, as they may limit pathogenesis and increase bacterial susceptibility to host killing. Staphylococcus aureus is a major cause of invasive skin and soft tissue infections (SSTIs) in both the hospital and community settings, and it is also becoming increasingly antibiotic resistant. Data from the research performed here suggests that bacterial disarmament through the suppression of S. aureus QS may bolster the host innate immune response and limit inflammation. 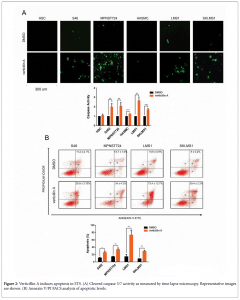 The heterogeneity of soft tissue sarcoma (STS) represents a major challenge for the development of effective therapeutics. Comprised of over 50 different histology subtypes of various etiologies, STS subsets are further characterized as either karyotypically simple or complex. Due to the number of genetic anomalies associated with genetically complex STS, development of therapies demonstrating potency against this STS cluster is especially challenging and yet greatly needed. Verticillin A is a small molecule natural product with demonstrated anticancer activity; however, the efficacy of this agent has never been evaluated in STS. Therefore, the goal of this study was to explore verticillin A as a potential STS therapeutic. 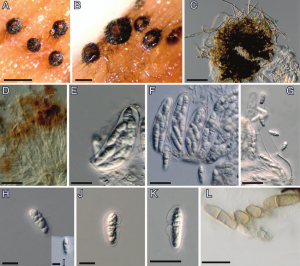 Minutisphaera is a recently established genus of freshwater Dothideomycetes characterized by small, globose to subglobose or apothecioid, erumpent to superficial, brown ascomata; fissitunicate, eight-spored, ovoid to obclavate asci; and 1-2-septate, clavate to broadly fusiform, hyaline to pale brown ascospores with or without a gelatinous sheath and filamentous appendages.