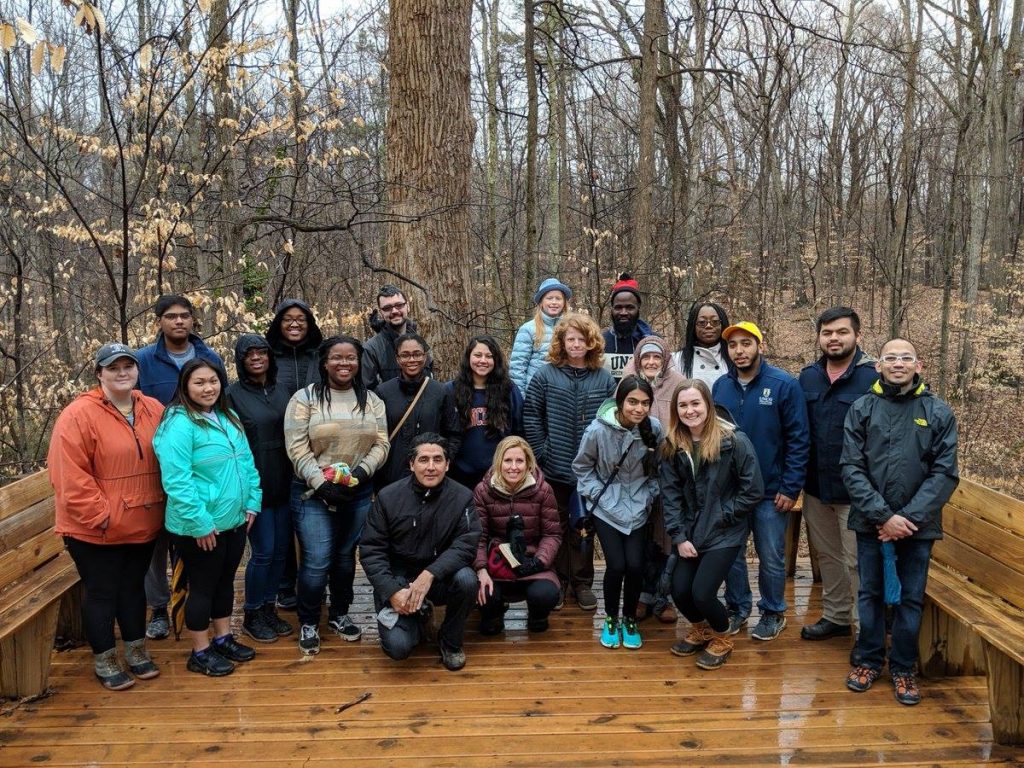 An exhibit by UNC Greensboro students, faculty, and staff inspired by a beloved tulip poplar tree in the Guilford Forest

Deep in the Guilford forest there is a great tree. For over 300 years, the massive tulip poplar has prevailed against ice storms and hurricanes and lightning, to stand today as one of the oldest trees in North Carolina. The tree is a marker of the southern terminus of the Underground Railroad, a living monument to the struggles of over 2,000 enslaved Africans and African Americans who found their way to freedom. Today, in the quiet shade of the great tree, we imagine the footsteps and murmurs of fugitives as they secretly made their way northward under the cover of night.

There has been much recent debate about the existence and display of memorials that reference slavery and the Civil War. Here we offer a different kind of exhibit. In The Underground Railroad Tree we collaboratively explore a broader view–one that intertwines different lives and blurs boundaries.  The work displayed and performed was conducted at UNC Greensboro by students, faculty, and staff in the context of two classes, an Honors History and methodology seminar co-taught by Dr. Omar Ali and Dr. Nadja Cech, and an Organic Chemistry course taught by Dr. Kimberly Petersen.  Through collaborative research and creative activity, we highlight the ways in which history, science, art, music, and dance are synergistic, complementary, inextricable. Please join us in this celebration of interconnectedness.

Freedom via the Underground Railroad through the Guilford Forest

They first arrived in 1501.  Over the course of the next three and a half centuries, from the windswept shores of West, West Central, and Southeastern Africa, an estimated 11 million men, women, and children came to the Americas. They came in the hulls of tightly-packed wooden ships traveling across the Atlantic from the areas of modern day Senegal, Guinea, Ghana, Nigeria, Congo, Angola, and Mozambique.  All told, an estimated 400,000 enslaved human beings landed on the eastern seaboard of what is now the United States, mostly in the 18th and 19th centuries. Throughout their forced migration, men and women fought their enslavement in all possible ways, including fleeing (a) when given an opportunity and resisting through force of arms–acts of desperation as much as an expression of their hopes and dreams.

Between 1819 and 1852, a century before the modern Civil Rights movement, African Americans and white Quakers here in North Carolina worked together to help enslaved people in the Piedmont escape to freedom. They fled to Indiana and Ohio, where they were welcomed by black and white allies. Figures like the Quaker cousins Levi (b) and Vestal Coffin worked with Sol, a free African American, to shuttle people out of slavery through the Guilford forest. Others, like the enslaved young mother Ede and her baby (c), went into these woods as a form of protest. Whether using the forest for a few days as a maroon (fugitive slave) or continuing on a journey northwards, those involved in the Underground Railroad took life-threatening risks with every step in defiance of the institution of slavery and its brutal and violent daily and moment-to-moment practices.  Many succeeded in reaching freedom. Some did not.

Ultimately, it would take force of arms to abolish slavery–the Civil War. The bloody war between the North and South raged on for four years, culminating with Union defeat of the Confederacy in 1865 .  The 13th Amendment to the U.S. Constitution was ratified, abolishing the enslavement of human beings in the nation. Upwards of 750,000 people died during those four years, with an estimated 250,000 of the casualties (about 1 in 3) dying of wounds and infections.  Many of these casualties could have been prevented with penicillin, the life-saving antibiotic that revolutionized medicine in the century to come.

The Mycelial Network – Another Kind of Underground Railroad

A single teaspoon of soil contains more than one billion microbes.  Indeed, every living surface is colonized with myriad organisms too miniscule to detect with the naked eye, bacteria, fungi, protozoa, algae. Humans rely on the organisms that make up our ‘microbiome’ for protection against pathogens and to help us digest our food.  Similarly, without their microscopic symbionts, trees would quickly die.

Fungi play a particularly important role in a healthy forest.  Mushrooms–sometimes delicious, sometimes deadly–are the fruiting bodies (that is, the reproductive organs) of fungi.  No less important are the string-like fungal mycelia, which extend underground in vast, interconnected networks. Mycelia serve such critical functions as decomposing and recycling dead matter, and connecting the roots of trees with one-another, shuttling food, water, and nutrients, sometimes across great distances.

To compete for resources in a healthy forest, fungi secrete potent molecules that influence the other microbes living around them.  One of these molecules is the antibiotic penicillin, discovered in 1928 by Alexander Fleming, which sparked the antibiotic revolution.  A cousin of the fungus that makes penicillin is shown here growing on a petri dish (a). This fungus was collected by Dr. Huzefa Raja and students from UNC Greensboro (b) from a sample of outer bark from the Underground Railroad Tree in the Guilford forest.  Students like Sabiba Hossain (c) are studying the chemical compounds produced by fungi such as this one, seeking new cures for untreatable disease.  Could the Underground Railroad Tree harbor a fungus that makes the next penicillin? It’s questions like these that keep us searching.

Peter Wohlleben, The Hidden Life of Trees: What They Feel, How They Communicate (Vancouver: Greystone Books, 2015)

Hege Library, “The Woods and the Beginning of the Underground Railroad,” Guilford College (January 2019)

Omar Ali, “Into the Forest, Out of the Woods: Thoughts on Eric Foner’s Gateway to Freedom,” Politics for the People: History and Politics from an Independent Perspective (April 2015)

Fergus Bordewich, Bound for Canaan: The Underground Railroad and the War for the Soul of America (New York: HarperCollins, 2005)